What We Knew by Barbara Stewart 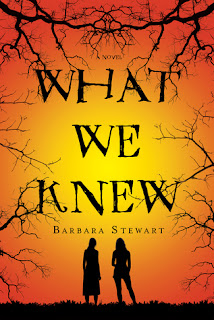 by Barbara Stewart
When a local myth starts to seem like a dangerous reality, two girls are set on a path that could change their lives forever

"When I was little, I imagined a monster: Scaly hands. Pits for eyes..."

When Tracy and her best friend, Lisa, were kids, stories about a man—a creep who exposes himself to little girls—kept them out of the woods and in their own backyards. But Tracy and Lisa aren't so little anymore, and the man in the woods is nothing but a stupid legend. Right?

But someone is in the woods. Someone is watching. And he knows all their secrets, secrets they can't tell anyone—not even each other.

Lisa's just being paranoid. At least that’s what Tracy thinks. But when a disturbing "gift" confirms her worst fears, it sets the girls on a dangerous journey that takes them beyond the edge of the woods. But reality is more terrifying than the most chilling myth, and what they find will test the bonds of friendship, loyalty, and love.

"Once upon a time, two girls were lost in the woods."

In Barbara's Stewart's What We Knew, Tracy and Lisa can't destroy the evil they'll face, but can they stop it from destroying each other?
Hardcover, 256 pages
Published July 14th 2015 by St. Martin's Griffin     I received a copy from readingteen.net for review
Lisa and Tracy have been friends for years. They fight, they play and are always there for each other. One day their friends decide it would be entertaining to go into the woods to see if the "banana man" really exists. Some say he's a dangerous criminal, others say he's just a pervert. Upon finding that there is a man who lives in the woods the girls begin to focus more on this idea that there is always someone watching. Paranoia can lead to a lot of things

Lisa has always been a protective person but when she begins to find objects from the "banana man's" house in her room she decides it's time to take control of her life. Tracy betrays somebody she loves and finds it hard to communicate with her mother. She turns inwards looking for what makes her happy and avoid serious issues in her life. A lot of bad decisions are made and their futures decided through the actions they take this summer.
The book is a contemporary, somewhat coming of age story that packs a lot of suspense. The voices of Lisa and Tracy is very well done in this story, so much raw truth in life that it was almost painful to read at times. I really enjoyed the fact that the author added in this mysterious atmosphere to the story throughout because it made for the ending to pack a bigger punch. How well do you really know your best friend?
This story is very raw, real and deals with serious issues. Growing up is hard to do! I recommend this one, it was interesting and thought provoking. I rated it 3 stars.
- November 28, 2016