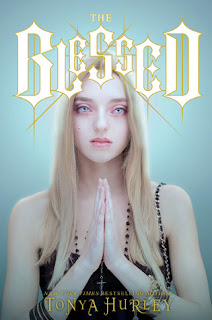 From the author of the New York Times bestselling ghostgirl series, the start to a captivating and haunting teen trilogy about three girls who become entangled with an enigmatic boy—a boy who believes he is a saint.What if martyrs and saints lived among us? And what if you were told you were one of them?

Meet Agnes, Cecilia, and Lucy. Three lost girls, each searching for something. But what they find is Beyond Belief

I had an opportunity to get a copy of the audiobook for review. It was a book that I was semi-interested in because the physical book as a cover that is interchangeable, the blue side that looks very heavenly, but the other side is dark, black and mysterious. This gave me the idea that maybe the book could be darker than I was originally thinking it might be from the summary.

When I first started listening to the audiobook I noticed right away the narrator, actress Kara Hayward, has a very distinctive voice. Which is not a bad thing, but I noticed right away that I was paying more attention to the way that she was pronouncing the words than what she was saying. It did take a long while before I got used to it. But I do think she did an excellent job showing each characters personalities throughout the story.

The actual story did get a little dark, but maybe not as much as I was expecting. The resonating and very upfront religious focus in the story was a little off putting to me. But you really cannot deny that you didn't expect that when you look at the summary and the cover. It is very obvious.

It's a slower paced book, the girls all going through some very painful times in their lives. It's emotional and overall they really do all have very strong, distinct, personalities. Quite easily they could become best friends or mortal enemies.

What I can say is that now, even weeks after I have finished listening to it. The story has still stuck with me, and not in a bad way. I find myself thinking about the characters and how they eventually come together in those last chapters, it really ended on a high note. It is something that I will be looking forward to the next book in the series, because it's peaked my interest.