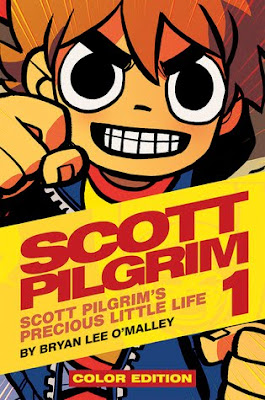 Just when you thought you knew all there was to know about Scott Pilgrim comes Scott Pilgrim Color Hardcover Volume 1: Precious Little Life! The first in a series of brand-new hardcover editions, this remastered, 6"x9" hardcover presents Scott's first "evil ex" battle as you've never seen it before - in full-color! Plus, previously unpublished extras and bonus materials make this mighty tome one that's required reading for Scottaholics everywhere

The slacker, band member of the group Sex Bomb and his adventures with girls, well particularly one girl has been redone in color format. I'm going to be honest here, I am a complete outsider. I have never seen the movie, read the comics or heard of this comic until the movie came out. It was a book vlogger on youtube that actually turned me onto looking into the series because of her enjoyment of it.

Scott has announced to his friends and sister that he's dating a 17 year old girl. (he is 23) and they think he's crazy, but overall (except his sister) are pretty supportive and love Knives enthusiasm at the band practices. The one thing I found amazingly surprising about Scott's character is that out of all the qualities that he doesn't have. His ability to listen and pay attention to what his girlfriend is saying was a good clue for me that maybe I might root for him. When he sees Ramona Flowers it's insta-love and he becomes obsessed with dating her. But when he finally gets a chance, that's when we learn that she has some baggage. And Scott has to fight for her if he wants to stay with her. (also an admirable trait)

I am a fan of the colored edition, bright and vibrant colors. I felt that I got just enough to know who each of the characters were. My favorite character was Knives, even though she's young I loved her energy.

It's a fun, very light read that was like brain candy. There is some fun added to the pages in which the band plays and it shows the music so you could play along, if you wished.

There are some additional pages in the end that gives an extra touch to the characters and who they are. It's all very silly, fun and most importantly, entertaining.