The Last Seer and the Tomb of Enoch by Ashland Menshouse 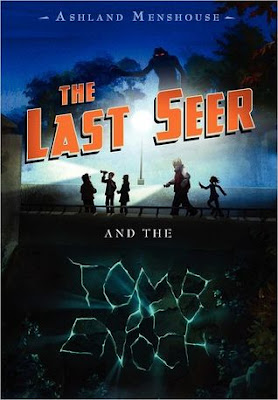 Do you believe?
Can a ghost haunt more than your home? Can a Sasquatch track more than footprints?
Aubrey Taylor's quaint and cozy life in the subdued, Appalachian town of Lake Julian had never been exceptional. Shouldered by his lifelong friends, Buzz Reiselstein and Rodriqa Auerbach, he quietly endured the puerile punishments of a persistent pack of pesky bullies that included the most-feared kid in school, Magnos Strumgarten, and his own obnoxiously, well-accomplished brother, Gaetan. Comfortable in his humdrum niche of the absolutely average, Aubrey never pushed back.
Until...fate dug a little too deep...and the unseen darkness of unspoken places rattled his mediocrity.
When spurious specters and elusive mountain men battle for a tomb of Watchers, buried in ages past, only those who choose to look beyond the surface feel the grip of the ancients' revenge. Unusual disappearances, a colorful cadre of insightful townsfolk and a whirlwind of blunders and mishaps exposes the struggling forces that transform Aubrey and his friends into more than spectators amidst the oldest war of all.
Prepare yourself to see the unseen as you've never seen it before (from goodreads.com)

This is a very fun and entertaining read with creatures paranormal and mythical, adventure and trips to the hospital. The events that the kids go through are both dangerous and exciting.
There is a variety of interesting characters that come into the mix as the kids set on their quest to answer some questions. Questions like, why is there a ghost haunting his room, and who is the mysterious new woman in town?
There were times that I did wish the book was not as long as it was. When there were certain points with a lot of action it slowed down a little too much for my taste before something happened again, a lot of descriptive and detailed writing. It might be harder for younger readers to hold their attention, but if they have a good attention span, it is worth the wait.
I think the story was very imaginative and sometimes spooky. The mixture of characters along with the creatures they come across, the people that help them and the ones that deter them. All very intriguing concepts and with this lengthy novel it will keep you entertained for several nights. Which I would also recommend, to take it in sections, end on the high points then when you start it up again the story will build up again to another point of action.
- May 14, 2012