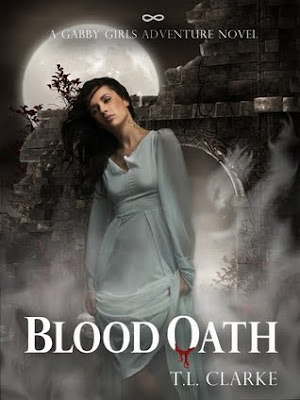 Welcome to the dark and powerful world of the Eternals.

Sixteen-year-old Gabrielle Martin discovers that she was born into a secret society called the Eternals—Warriors sworn through blood to annihilate dark and evil creatures that walk the shadows of the earth. Everything she has known to be true is a lie…just smoke and mirrors to disguise a deadly world filled with half-human, half-vampire Underworld Warriors with one goal—to kill all Eternal Warriors.

This is the 2nd book in the series, in my opinion they can be read out of order, but for those that hate spoilers you may want to skip this post!

Four friends Gabrielle, Jessica, Zora, and Rosalind found out that they are part of a magical group. They now have move and learn how to use their powers.
Before they make the trip to their new school their current school is attacked and almost everyone is killed.
The girls are swept off to their new school for training and safe keeping, and they are thrown head first into training because of the events that happened.
Gabrielle find out that she is Akasha reincarnate, and possibly the key to solving the war.
Rosalinda starts to distance herself from the other girls. As they begin training they all seem to be forming new friendships, both good and bad. And easily get distracted with the new league of interesting boys.
Gabrielle's Grandmother, who is on the Counsel at the school is suddenly ill, but it's been caused by black magic, and the girls must find the magical book that is heavily guarded at the school. Along with the other girls they must get the book to help her grandmother as well as keep up the training and be on their guard against the attackers that they have preparing for.
Can Gabrielle trust the only girls now that they seem to be growing apart, and is she able to save her grandmother as well as prepare for the attack and impending war??

There are boy problems, friend problems and a lot of adventure and some fight scenes. It's a nice clean read, with a Nancy drew mystery with a paranormal twist. The girls have to re-evaluate their friendships and look within each other as well, they all learn more about themselves.
- April 27, 2012