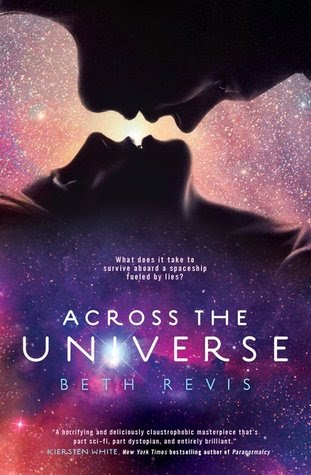 Description from http://www.goodreads.com/book/show/8235178-across-the-universe
Seventeen-year-old Amy joins her parents as frozen cargo aboard the vast spaceship Godspeed and expects to awaken on a new planet, three hundred years in the future. Never could she have known that her frozen slumber would come to an end fifty years too soon and that she would be thrust into the brave new world of a spaceship that lives by its own rules.

Amy quickly realizes that her awakening was no mere computer malfunction. Someone-one of the few thousand inhabitants of the spaceship-tried to kill her. And if Amy doesn't do something soon, her parents will be next.
Now Amy must race to unlock Godspeed's hidden secrets. But out of her list of murder suspects, there's only one who matters: Elder, the future leader of the ship and the love she could never have seen coming.
Unfortunately I have not finished this book in time to do a full review (But I will have it up within the week) But I have been soo excited for this book's Birthday yesterday I had to acknowledge  it's release day! The map you see above is actually on the inside of the dust jacket (cover of the book) and it's interchangeable which I think is completely awesome! What I have read so far this book deserves all the hype it's been getting and I will have a full review to come, please enjoy the trailer!
- January 12, 2011