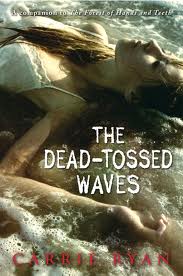 I thought my downfall with this book was reading after the Hunger Games, but as I was reading other reviews I saw that people actually shared by opinion on this one. http://www.persnicketysnark.com/2010/04/review-dead-tossed-wavescarrie-ryan.html for example I totally agree with stating that this book SHOULD HAVE been written from Elias' point of view. He is much more interesting that the main character Gaby. I felt she was very indecisive, and at times just drove me crazy not sticking with a decision without having to debate it to death.   Even though Catcher was somewhat more entertaining because of his circumstance, I still think Elias is the best character here, and wish I could have heard the story from his perspective.
The idea of the forest, and undead is really a interesting take on "zombie's" -she never calls them that in the story. The author has some great ideas. I also did some research on the audiobook, and it has the same tone as the book. While listening I heard at least 3 words mispronounced. Now I know your saying "just three words" but I really get put off when listening to an audio book and they mispronounce a word, I get stuck on that miss and get distracted from the story. I also have this quirky thing when reading a physical book, if I come across a typo I have to walk away from the book for a minute because I get so distracted for some reason, but I'm ok to come back to it after a minute or two.
So overall this book has romance, zombies and a mystery.
- October 29, 2010