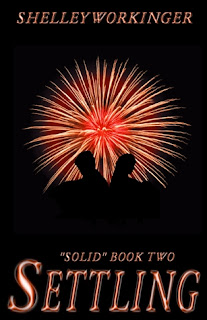 At the beginning of the summer, Clio Kaid was one of a hundred teens brought to a secret Army installation. But it was no ordinary camp and they weren’t ordinary kids…

Picking up where “Solid” left off, Clio and her friends realize that they aren’t ready to go home; they’re determined to stay on campus and continue their journey of self- discovery. But someone doesn’t feel the same way and will do anything to drive them away – even kill.

Friendships will be tested, abilities will evolve, and more secrets will come out as the teens race to stop the killer before he sets his sights on one of them…

I enjoyed this second novel as much as the first! It is a high energy and fast paced story that has great characters and super hero action scenes.
As Caliope and her friends are still continuing their training and schooling, murders have begun to happen. They are trying to continue on with learning more about what is going on, building up their powers all while trying to figure out who is committing the murders. And, last but not least, stay alive.
My favorite part of these stories so far have been the characters. I enjoy the dialogue and banter between them. Very humorous lines amidst the amazing super hero powers and the crazy killer.
If I were able to choose my super-hero power it would also be to turn invisible.

What would your super-human power be? would you rather be be able to fly or become invisible..or run fast?
- January 20, 2012