The Secrets of Lake Road by Karen Katchur 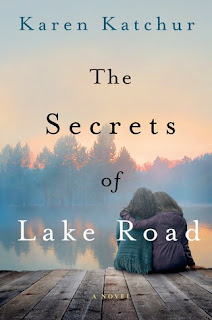 The Secrets of Lake Road

by Karen Katchur
A haunting story about the destructive power of secrets, this accomplished and gripping suspenseful women's fiction debut is perfect for fans of Lisa Scottoline and Heather Gudenkauf

Jo has been hiding the truth about her role in her high school boyfriend’s drowning for sixteen years. Every summer, she drops her children off with her mother at the lakeside community where she spent summers growing up, but cannot bear to stay herself; everything about the lake reminds her of the guilt she feels. For her daughter Caroline, however, the lake is a precious world apart; its familiarity and sameness comforts her every year despite the changes in her life outside its bounds. At twelve years old and caught between childhood and adolescence, she longs to win her mother’s love and doesn’t understand why Jo keeps running away.

Then seven-year-old Sara Starr goes missing from the community beach. Rescue workers fail to uncover any sign of her—but instead dredge up the bones Jo hoped would never be discovered, shattering the quiet lakeside community’s tranquility. Caroline was one of the last people to see Sara alive on the beach, and feels responsible for her disappearance. She takes it upon herself to figure out what happened to the little girl. As Caroline searches for Sara, she uncovers the secrets her mother has been hiding, unraveling the very foundation of everything she knows about herself and her family. The Secrets of Lake Road by Karen Katchur is a riveting novel that is impossible to put down and hard to forget.


Published August 4th 2015 by Thomas Dunne Books  I received a review copy from readingteen.net
What I loved most about this book was it reminded me of one of my favorite movies A Walk on The Moon (Diane Lane). The whole atmosphere of living in cabin by the lake and the summertime laziness is very well portrayed in this story. The story is told from multiple perspectives, mostly from 12 year old Caroline. A story I would only recommend to older teens and adults. It covers a lot of serious issues and is definitely not a light summer read. (Although I couldn't stop turning pages!)
It begins with the drowning of a young girl that closes the beach for several days for recovery. With the atmosphere set for the story of loss that reminds the whole area of other drownings in the past. And when bones are found while searching for Sara, secrets, lies and an old case of drowning re-opens in the hearts of the community. Caroline's family is the focus of the story and the behavior of those living in the cabin for the summer gets her searching deeper into the the last drowning, 26 year old Billy Hawkes.
Caroline has to do a lot of growing up over this summer. With the main source of entertainment (the lake) being closed off, the kids must find other ways to keep busy. This seclusion also has Caroline realizing how different she is than her friend Megan and she beings spending more time alone or with the boys.
Jo, Caroline's mother has had strained relationships with all of her family members. She is constantly on the run from her past and present, easily scared off. This summer causes her to re-analyze and re-build her relationships, especially when they are all directly confronted with the past.
I loved this story, the prose and atmosphere of the setting was very well done and had me longing for more. At it's heart it is a story of family and growing apart from each other. It covers a lot of adult topics, as well as a coming of age story. A lot of mystery, secrets, heart break and healing. It was a really touching read.  I gave it 5 stars
- May 20, 2018 No comments:

See What I Have Done by Sarah Schmidt

See What I Have Done by Sarah Schmidt 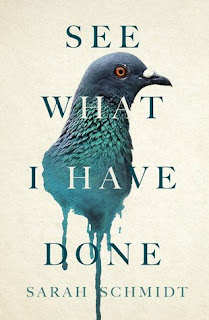 In this riveting debut novel, See What I Have Done, Sarah Schmidt recasts one of the most fascinating murder cases of all time into an intimate story of a volatile household and a family devoid of love.

On the morning of August 4, 1892, Lizzie Borden calls out to her maid: Someone’s killed Father. The brutal ax-murder of Andrew and Abby Borden in their home in Fall River, Massachusetts, leaves little evidence and many unanswered questions. While neighbors struggle to understand why anyone would want to harm the respected Bordens, those close to the family have a different tale to tell—of a father with an explosive temper; a spiteful stepmother; and two spinster sisters, with a bond even stronger than blood, desperate for their independence.

As the police search for clues, Emma comforts an increasingly distraught Lizzie whose memories of that morning flash in scattered fragments. Had she been in the barn or the pear arbor to escape the stifling heat of the house? When did she last speak to her stepmother? Were they really gone and would everything be better now? Shifting among the perspectives of the unreliable Lizzie, her older sister Emma, the housemaid Bridget, and the enigmatic stranger Benjamin, the events of that fateful day are slowly revealed through a high-wire feat of storytelling.

In See What I Have Done, author Sarah Schmidt puts the reader right inside of the Borden house on the day of the murders – the famous 1892 case in which Lizzie Borden was accused of murdering her father and her step mother with an axe. This version not only allows us to view the story from the inside but from different perspectives of those closest to the case.

The story unfolds through the viewpoints of Lizzie, her sister Emma, the maid Bridget and one outsider, Ben. Although in the beginning I was confused about how Ben’s character would fit into the story, I found that he plays a huge part in how the author has chosen to wrap up the story and what happened after the murders. What I absolutely loved about this story is that, besides Emma, the other characters are all presented as possible killers and very unreliable narrators who have their own reasons to want the Borden’s dead. What a hostile environment the household was to live in!

Lizzie herself is full of zest! She is dramatic, haughty and cunning – the type of person you will love to hate. She was absolutely my favourite character with Bridget coming in a very close second because of her views of how the Borden’s ran their household and the kind of messes she was always left to clean up. Then there was Emma the oldest and put-upon daughter who only wants to find a love of her own and a life outside the home.

I really enjoyed the pacing of the story and how well the characters were adapted. They all had their own very true voices that played well in this engrossing story line of those fateful hours leading up to the murders. I was very entertained the whole time and found it a joy to jump into this secretive setting of the Borden household.
- May 18, 2018 No comments: