A Veil of Shadows: The Shadow Gate Chronicles Book II 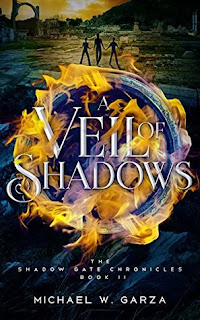 A desperate search leads to a new world.
Naomi and Gavin are on the run. Having narrowly escaped Azzmon’s clutches, they find themselves hunted by Malick, another Shade Lord. He has amassed an army of foul creatures, and the city-state of Tarravale stands on the brink of chaos. Naomi’s ability to open Shadow Gates makes her an alluring target, and the Shade Lord will stop at nothing to possess her. The children must find a way to escape before their new world is buried in an unwinnable war
Krista's Review:
What I have enjoyed most about this series so far is the grandness of the world building.  From the landscape to the creatures the author does a fantastic job inviting you into a imaginative and interesting world.

In the first book one of the things I enjoyed the most was the connection the brother and sister team had. They were there for each other and trusted each other even with some questionable actions by the other they knew they were fighting for each other. With the second book I felt that the characters dynamics were not as strong. Even the dialogue seems to fail the situations.In several places throughout this story I believe that the dialogue between the two main characters, and sometimes with their grandfather their connections could be strengthened so much more, I was a bit saddened at what could have been some real character growth in the story.

The strength still remains with the second book the ongoing action and discoveries as they continue through the world looking for the gate to return home, alive. The story is very plot driven and continues to be a fun source of imaginative dark and interesting characters.

Wake the Hollow by Gaby Triana 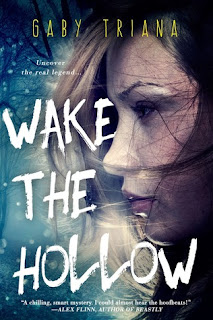 Wake the Hollow  by Gaby Triana

Tragedy has brought Micaela Burgos back to her hometown of Sleepy Hollow. It’s been six years since she chose to live with her father in Miami instead of her eccentric mother. And now her mother is dead.

This town will suck you in and not let go.

Sleepy Hollow may be famous for its fabled headless horseman, but the town is real. So are its prejudices and hatred, targeting Mica’s family as outsiders. But ghostly voices carry on the wind, whispering that her mother’s death was based on hate…not an accident at all. With the help of two very different guys—who pull at her heart in very different ways—Micaela must awaken the hidden secret of Sleepy Hollow…before she meets her mother’s fate.

Unless, of course, the answers find you first.

This book is just as much a story of a town as it is the main character Micaela. Having grown up the small town of  Sleepy Hollow all of the families know each other, work together, go to school together. As well as keep secrets from one another.

Micaela moved when her parents separated but has returned after her mothers death to take care of her belongings. This turns out to be a bigger task than she expected as the town people believe her mother has stolen a sacred diary that has the secret they have all been looking for. True heir of the writer Washington Irving.

The story leads us through the people of the town and Micaela's history with it. Along with how the families grew apart and hatred and greed began to devour them. Micaela is not sure who she can really trust and is left on her own to discover the truth...but with the help from some ghosts they show her the way.

I found this story to be an interesting take on the Legend of Sleepy Hollow, although ghosts are involved it focuses more on the mystery of finding the lost book. An amateur sleuth who has connections on every side of the case and does not know who to trust, even her own mother. The writing was a bit slower paced and the romance was on the lighter side. It all concludes in very exciting ending that I highly enjoyed.