The Secret Sea by Barry Lyga 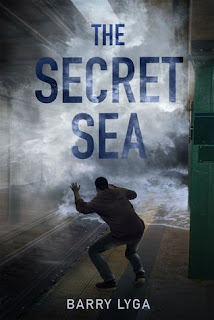 Zak Killian hears a voice. Could it be a guardian angel? A ghost? No, that’s crazy. But sometimes the voice is so real…It warns him of danger—directs him to safety.

Then one day Zak is standing on the subway platform when the voice warns him to run. The tunnel starts to fill with water. His friends Moira and Khalid believe this is more than a premonition, and soon all three find themselves in an alternate universe that is both familiar and seriously strange. As Zak unravels the mystery behind the voice, he faces decisions that may mean the end of their world at home—if they can even get home!

The author makes a note that inspiration for this story came about when he read a story that a ship had been unearthed under the ground zero rubble. A boat, so far inland and how it got there and the message is sends to today. After reading that this story made a lot more sense to me. But going into the book not knowing that led to some very weird times when I was trying to piece together what was happening and how the events made sense blended together.
This story is a mixture of a thriller-adventure with science fiction and a bit of paranormal. Zak begins to hear somebody calling to him, and soon he finds that is is being drawn to the subway system downtown trying to get him to cross over to where ever they are. With some prodding and accompaniment of his two best friends Zak does find his way over the border into a new dimension, following the clues to who the voices belong to and their connection to him.
I found myself flying through this book, there was always something happening and ramping up the story lines as it goes. There were times that I would find some pause trying to figure out how certain events could play out in the story. For example Zak has a condition and when the jump to this new dimension he must find whatever version of the antidote the new world had so he didn't end up dead. At first leading me to believe that it was something the author did to add some drama to the story to give it more of a thriller feeling, being on a deadline to find the medicine, or die.
What I found is that it made me think a lot about how it is just the small things that can make major changes to our futures, medicine, weather and ideas. In this different dimension that they have to find their way around is a mixture of the current day New York City and what could be a slightly different one. One of the main focuses of this story is New York City itself. As I only have a very small idea of the streets, monuments and buildings are like there. I believe that people who are more familiar with the city will really enjoy this story as it does compare a lot of the landscape between the two worlds.
I came away from this book with more thoughts of "that was interesting" than anything else. I didn't love the story but I found it very entertaining and attention grabbing, especially in the end where it took a bit of an angle that I didn't see coming.

This review was originally written for and posted on readingteen.net
- December 21, 2016 No comments: 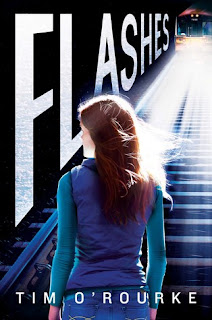 by Tim O'Rourke
A brilliant detective thriller with a supernatural twist!

Flashes of things she can't explain. A girl in trouble. The sound of trains. She feels certain they are clues to a crime. But no one will believe her. Until she meets Tom, a young policeman on his first case: an accidental death on the railway tracks, not far from where Charley lives. Was it an accident, suicide...or murder?

The attraction between Charley and Tom is instant, but can they work together to find out what really happened on the tracks before it happens again?
Hardcover, 320 pages
Expected publication: October 27th 2015 by Chicken House  I received a review copy from readingteen.net
Recommended for fans of Slide by Jill Hathaway and 17 & Gone by Nova Ren Suma. Flashes is the story of Charley who has been experiencing flashes- or visions- of girls whom have been kidnapped and murdered. They all seem to be connected somehow and she's been having them for years. When her best friend dies, the only one that believed what she saw. She decides that she has to find out the answers to why.
Charley has always been teased at school and it was hard enough to find a friend that stood by her side. One that believed she saw the flashes and they meant something. When her best friend dies she has only her father. A Father that gets upset whenever she mentions her flashes and takes her to see doctors. When trying to track down the latest vision Charley meets the newbie police officer on the case and they begin to work a case together. He believes her and they decide a serial killer is on the loose.
For a book about murders and romance it is a pretty clean read. There is violence (of course) but the story is a subtle and progressive mystery. My favorite character was Tom, as a young and new police officer he has not yet been corrupted by the system and trusts his gut. The story is told from both Charley and Tom's perspectives, also more than getting the flashes there are other ways that the dead girls are asking Charley for help.
Supernatural mystery with a cute beginning to a romance. Charley and Tom worked great together and it would be interesting to see what could happen next in their story.
- December 09, 2016 No comments:

Hide and Seek by Jane Casey 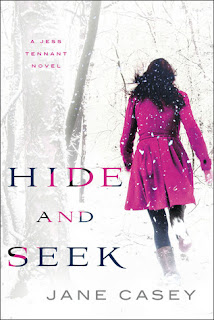 It's Christmas in Port Sentinel, the tiny English town where Jess Tennant has been living for more than a year now. She wasn't sure how she felt about moving away from London when her mom dragged her to Port Sentinel right before


Published August 25th 2015 by St. Martin's Griffin (first published July 30th 2015)   Review copy received from readingteen.net
It's the Christmas season and Jess is trying to find out what happened to Gilly, right when family and boyfriend problems also occur. Jess Tennant is one of those unforgettable characters, and very consistent. You never doubt that when she is "advised" to not do something, she is the first one in line. When her project partner goes missing on the night they are scheduled to meet. Jess goes to her home to see if everything is ok. Turns out that Gilly is gone. Jess begins to investigate if Gilly could be a runaway or worse, dead. Giving the reader several different directions the story can go, Jess then begins to break down all the clues and questioning those in Gilly's life.
As the series has progressed Jess is opening up to working directly with the police. And by that I mean give them the information she feels in necessary to act on things she can't. Gilly has lived with her abusive mother for years and is dying for some attention and affection in her life. Jess finds her journal early on in the story but it's cryptic.
She spends the rest of the novel trying to decipher what the diary entries mean. By pinpointing who she was with on certain days and what her relationship was with them.
Jess tends to fixate on things that tend to bother her. She doesn't give up and even puts her own life in danger to help others and find answers.
- December 02, 2016 No comments: