Today I have Marianne de Pierres talking about weapons. In her new book Mythmaker, Virgin Jackson and friends use a variety of weapons to battle the Mythos. Not to mention the all out war that breaks out. My full review is at the end of the post.
Happy Reading
Krista

Weapons of Choice in the PEACEMAKER series

Being a love letter to the Western genre, I knew when writing this series that I would need to make decisions about weapons. I mean, what’s a Western without a six gun? But for credibility’s sake, I had to respect the fact that this is set in Australia. For that reason, I restricted the ownership and use of weapons to those working in law-related professions, or the criminals. That gives Nate and Virgin the option to carry arms, but not the ordinary person in the street. Papa Brise and all the gangs in Mystere, of course, are heavily armed.

When it came to deciding how to battle against the MYTHOS though, I had to get more  imaginative. How do you fight an ethereal, mythical creature of no substance? It got me thinking about how my parents-in-law used to have an ioniser in their living room, and I did some reading and decided that an ionic disruptor might do nicely. I mean, you can’t beat molecular annihilation to stop everything in its tracks! Nate also gives Virgin a baton about halfway through MYTHMAKER. It works kind of like a cattle prod on the Mythos – more a deterrent than a weapon. They don’t like the electrical charge but it doesn’t really seriously harm them.

I grew up on a farm around rifles and bullwhips and in other areas of my life I’ve been exposed to competition rifle shooting. I don’t like weapons particularly, but they are a reality, and in fictional landscapes they have their function. Less is often more, when deciding how to employ them in your stories, unless you need to make a really big bang, and then you can unleash. 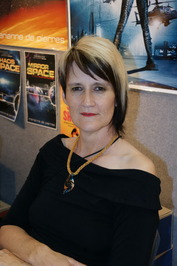 Marianne de Pierres is the award winning author of the acclaimed Parrish Plessis,Sentients of Orion and Peacemaker science fiction series. Marianne is an active supporter of genre fiction and has mentored many writers. She lives in Brisbane, Australia, with her husband and three galahs. Her Night Creatures series, Burn Bright, Angel Arias and Shine Light has been very popular among young adult fiction readers. Marianne is also the Davitt award-winning author of the Tara Sharp humourous crime series under the pseudonym Marianne Delacourt. Visit her websites at http://www.mariannedepierres.com http://www.tarasharp.com.au http://www.burnbright.com.au and http://glitterrose.wordpress.com 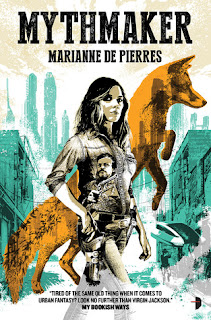 Virgin’s in a tight spot. A murder rap hangs over her head and isn’t likely to go away unless she agrees to work for an organisation called GJIC with Nate Sixkiller as her immediate boss. Being blackmailed is one thing, discovering that her mother is both alive and the President of GJIC is quite another. Then there’s the escalation of Mythos sightings, and the bounty on her head. Oddly, the strange and dangerous Hamish Burns is the only one she can rely on. Virgin’s life gets… untidy.


Published October 1st 2015 by Angry Robot
5 Star Review
In Peacemaker we are introduced to Virgin Jackson and her love for Birrimun Park - the world's last natural landscape. Her lingering sadness of losing her father and having to work with a new partner. Nate Sixkiller, the US Marshall now trainee. After the events in book one she is now having to (grudgingly) work for GJIC and now Sixkiller is her boss.

You do not have to read book one to fully enjoy Mythmaker. There is enough world building and explanations for everyone to enjoy as a standalone. I have to say that I enjoyed this book so much! I didn't want to leave Virgin and the ending had me on the edge of my seat. I was sad to see her go and now I will forever wonder what could happen next.

Mythmaker was a thrill ride. Virgin spends less time at the Park and more time in the Megacity investigating the escalated Mythos sightings. She is being watched, followed and a hit has been put out on her. Virgin must go to the darkest, dirtiest parts of town all while trying to keep a low profile, yet question those who are connected to the Mythos.

With the help of Hamish and her best friend Caro, Virgin is lucky to still be alive by the end. She shows a lot of personality and empathy as not only her work life has changed but her personal life is turned upside down. There is all out war, action packed scenes and long kept secrets that have to come center stage to save the world.

I highly enjoyed Mythmaker, it kept me hooked and constantly surprised with the twists. In Peacemaker I was introduced to Virgin Jackson, now in Mythmaker I never wanted to let her go. What a fun ride!
- October 13, 2015 No comments: 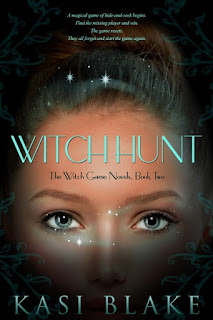 A magical game of hide-and-seek begins.
Find the missing player and win.
The game resets.
They all forget and start the game again.


Seventeen-year-old Starr Hughes hasn't believed in magic since the day her mother died. As an aspiring reporter, the only thing she cares about is cold, hard facts. So when she hears the popular kids at school (the It-Squad) are about to start a secret game, she wants every detail, especially since she has a major crush on gorgeous Dylan Winchester. Hiding under the headmaster's desk, planting bugs, and breaking into a classmate's home are all on her to-do list. With her boy-crazy best friend Lily at her side, Starr discovers that witches are not only real, but they also need her help. Someone is using the game to steal their memories, their powers, and perhaps even their lives.
- October 06, 2015 No comments: 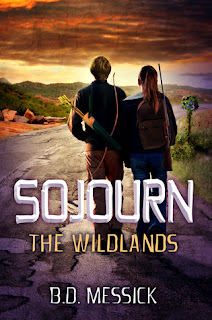 In a dark future, follow seventeen year old Rayn Mirago as she leaves everything she knows behind, and embarks on a journey that will either prove her worth, or take her life.

Rayn Mirago's seventeenth birthday is tomorrow, but there will be no party, no gifts, and no celebration. Like every other child in this world where humanity is on the brink of extinction and resources are at a premium, she must make her Sojourn across the former United States to prove her worth. The human race has nearly been wiped due to overpopulation, global warming, and our own ignorance and conceit. The coastal cities of the U.S. have been reclaimed by the ocean and the Midwest is now a vast desert wasteland known as the Deadlands. The remaining fifty thousand or so survivors in the old United States now live in one of five walled cities, called Enclaves where they eek out a meager existence.

Rayn's Sojourn begins when she steps through the gates of the Vegas Enclave and into the vast wilderness between the old city and Deadlands, an area known as the Wildlands. She will face many struggles and dangers that will challenge her, make her doubt herself, and force her to realize that she is stronger than she ever imagined.

But first, she must overcome the burden of leaving her old life, everything and everyone she has ever known and loved behind.

The summary does lead us to believe that Rayn goes on her Sojourn alone. Only after a few days of traveling, Rayn is joined by her best friend and love interest for the rest of the book. There is more romance to the story that I expected going in and for a survival story it is a very tame read.

As the story progresses the two always seem to have enough to keep them comfortable. The struggles they do have with encounters with others are very short scenes. They overcome the majority of their situations with more ease than I was hoping for in the story. The book is pretty tame read and more romance than survival story in my opinion.

Throughout the story the two seem to be in a honeymoon mode. They are always admiring each other, both physically as well as abilities. Food, shelter and medicine are all easily gained at the time of need. Making this story tamer than most and good for young readers. Especially those that enjoy romance stories.