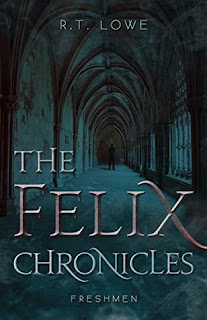 Reeling from a terrible accident that claimed the lives of his parents, Felix arrives at Portland College hoping only to survive the experience. In time, however, his reality star roommate shows him there is more to higher education than just classes, shared bathrooms and bad dorm food, and Felix gradually dares to believe he can put his past behind him. But a fateful storm looms on the horizon: In the nearby woods, two hikers become the latest victims in a series of gruesome murders; a disfigured giant embarks on a vicious cross-country rampage, killing teenagers who fail his 'test'; and an ancient society of assassins tasked with eradicating the wielders of a mysterious source of power awakens after a long silence. Only one man--the school's groundskeeper--knows that the seemingly unrelated events are connected, and that an eighteen-year-old boy stands in the center of the storm.


Published May 11th 2015
This story had a lot of very interesting aspect to it and overall I thought it was an ok read. I loved the chapters with the villains (murderers, kidnappers, creatures of the forest) but had a harder time with the chapters containing the main characters.

Felix, his reality star room-mate and the ground keeper were the hardest characters for me to like. There was a shining star and what really made it worth the read for me, was Felix's best friend Allison. Allison and the villains really made the story for me and it was slow getting through the parts without them.

I did feel that there is a lot of the story that doesn't add anything to the storyline and could have been edited out to get a more powerful story. Yet I could also be biased because all those parts also included the characters I felt were dull.

Even though I feel like this book is a 2 1/2 star, not a bad read and at the low price it's being offered I still consider it a good buy. I do believe it's a little long at 500 pages and some characters could have been amped up a bit. It is something I recommend, enjoyable overall, yet hoping that the future books contain more Allison.
- July 11, 2015 No comments: