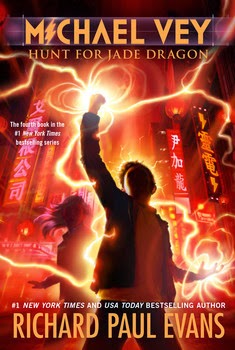 Michael and his friends must rescue a child prodigy as the thrilling action continues in this electrifying fourth installment of the #1 New York Times bestselling series!

Michael, Taylor, Ostin and the rest of the Electroclan head to China in search of a girl who may have discovered why Michael and his friends became electric. Her name is Lin Julung, or Jade Dragon, and she’s a child prodigy with an IQ higher than Einstein’s—and Ostin’s.

But Hatch gets to her first, and the Elgen are holding her prisoner in their Taiwan Starxource plant. Now the Voice wants Michael and the Electroclan to go to Taiwan and free her before Hatch can realize his dreams of an army of electric children.

The hunt for Jade Dragon is on, and it’s a race against time!

I received a free copy of the audio book for review. I have listened to this whole series on audio book and have come to really enjoy them. I was really looking forwarding to the new edition to the series but felt that this one fell short from what the other books have been.

There is not as much to the adventure even though they travel to Taiwan it felt to me that there was just a lot of standing around and waiting. The group did not want to be seen as to let Hatch know they were close so they stayed hidden and the story really fell short because of that.

The majority of the story was the group sitting around and talking, doing a little shopping. So when anything out of the usual happened the reader is waiting for, expecting and could see it coming by the time it eventually does.

I also felt that the narrator for the audio book on this one was a bit inconsistent with the accents of the foreign characters and at times it came off sloppy, mixture of accents in my opinion. While I must admit that this aspect will most likely not be noticed by the younger listeners, it didn't live up to what I have been getting from the first 3 books I listened to.

The Hunt for Jade Dragon addition to the series does have some important information and event that takes place that is necessary to read for the series, but by not cutting it shorter and combining it into the next book in the series led to a long read with little payout.

This is a series that I have enjoyed immensely so far and and I do recommend it for readers, great characters and a lot of traveling the world and seeing different cultures. I just feel this particular book fell short in comparison to the others.

Awoken (The Lucidites #1) by Sarah Noffke 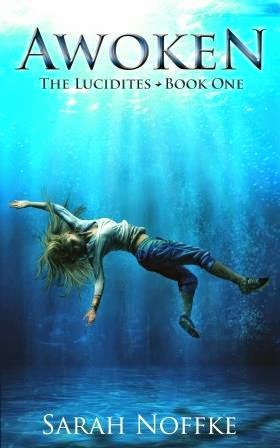 Around the world humans are hallucinating after sleepless nights.

In a sterile, underground institute the forecasters keep reporting the same events.

And in the backwoods of Texas, a sixteen-year-old girl is about to be caught up in a fierce, ethereal battle.

Meet Roya Stark. She drowns every night in her dreams, spends her hours reading classic literature to avoid her family’s ridicule, and is prone to premonitions—which are becoming more frequent. And now her dreams are filled with strangers offering to reveal what she has always wanted to know: Who is she? That’s the question that haunts her, and she's about to find out. But will Roya live to regret learning the truth?


The book begins right into the beginning of the plot. We learn more about the main character and her life into an already progressing story. Roya has just recently learned of her abilities to dream travel and the Lucidites call upon her help to fight against the evil Zhuang who is causing the world troubles. Roya learns she is the chosen one and must help fight him to save her family...and the world.

To say that Roya has a rude awakening when first trying to enter the institute to get her instructions, it's kind. Roya is confronted with humiliation and confusion since the moment she wakes up. Her attitude comes off as very haughty and rude. She feels played and embarrassed but she never fully grows out of her bad attitude. I never came to really love her character but I did find her tolerable after awhile as she softens to the other characters.

The writing is good and the pacing well done. It is mostly like a special school setting where they must complete tasks to obtain a place on the team to go into battle. They practice with their special abilities and form a group that can work together under stress.

The trials and abilities they have adds a lot of science fiction to a fantasy story. There is romance and the beginning of what looks like a triangle. The whole book is leading up to a very action packed ending in which a lot happens very fast. The majority of the book we are getting to know the characters and how well they work with each other.

I enjoyed the story and it's something I would do a re-read on. I think those who enjoy a feisty and bitchy characters who are brutally  honest would enjoy the story. At times there was some reminiscent to the feelings I had while reading Divergent.