A Murder of Magpies by Sarah Bromley 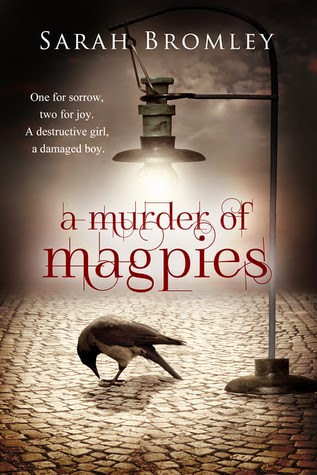 Winter in Black Orchard, Wisconsin, is long and dark, and sixteen-year-old Vayda Silver prays the snow will keep the truth and secrecy of the last two years buried. Hiding from the past with her father and twin brother, Vayda knows the rules: never return to the town of her mother’s murder, and never work a Mind Game where someone might see.

No one can know the toll emotions take on Vayda, how emotion becomes energy in her hands, or how she can’t control the destruction she causes. But it's not long before her powers can no longer be contained. The truth is dangerously close to being exposed, placing Vayda and her family at risk.

Until someone quiets the chaos inside her.

Unwanted. That's all Ward Ravenscroft has ever been. To cope, he numbs the pain of rejection by denying himself emotions of any kind. Yet Vayda stirs something in him. He can't explain the hold she has on him--inspiring him with both hope and fear. He claims not to scare easily, except he doesn't know what her powers can do. Yet.

Just as Vayda and Ward draw closer, she finds the past isn't so easily buried. And when it follows the Silvers to Black Orchard, it has murder in mind.

"Richly written, A MURDER OF MAGPIES isn't a book to be read, but one to be devoured by the light of a dying fire. Sarah Bromley will pull readers in and have them glancing constantly over their shoulder, where the ghosts of the past await them."
- New York Times bestselling author Heather Brewer

Told in two different perspectives, Ward and Vanya. A Murder of Pagpies is an atmospheric read set in Black Orchard, Wisconsin. Vanya is overcome with emotions that are hard to control and Ward, tries to feel no emotions at all. When their paths cross, they seem to equal each other out. While Vanya tries to take a more controlled effort in her abilities her twin Jonah releases his unrestrained. Together with their father they are on the run from their past.

I enjoyed the mixture of characters and the roles they played.The twins are outcasts in their new high school and most think of them as cursed. There is a lot of hatred and bullying, language and sexual content. I liked the romantic aspects in the book, it had some interesting ideas that I haven't come across in a book before. The writing will really suck you in and help you feel lost in a different world for awhile.

The "mind games" that the Silver's are capable of with their powers is something that makes them stand out, making it very hard to hide. They have to struggle daily but also seeking some comfort and calm in their lives, even though both are not going to happen while on the run.

I found this book to be very unique and a fun read. Something I do recommend, it's dark and edgy.

Sarah Bromley drinks too much coffee, likes her music loud and off-key, and has loved spooky things since she first saw “An American Werewolf in London” when she was five years old. She currently lives in the St. Louis area with her high-school-sweetheart-turned-heroic-husband, three children, and three dogs. You can find her on Twitter and at her blog. She also writes under the name Sarah Jude. She is represented by Miriam Kriss of the Irene Goodman Literary Agency.
Connect with the Author:  Website | Twitter | Facebook | Goodreads