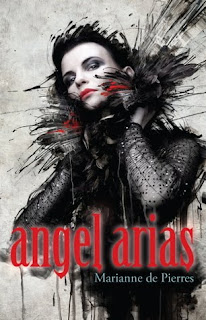 Retra - now called Naif - has escaped from Ixion, the island of ever-night. She doesn't know if her friends on the island survived the battle between the Ripers and the rebels. But she does know that she must return home, behind the sealed walls of Grave, to find out why the Ripers have been seen there talking to the councillors. What links the two worlds?

First she must convince Ruzalia to help her. The fierce pirate captain saves those who face terrible fates on Ixion, but that doesn't guarantee their gratitude. Instead, she faces a revolt - and Naif is caught in the middle.

Naif will need all her courage to survive. For Lenoir, who wants to keep her safe, for her friends Suki and Rollo, if they live, for Markes, who has secrets of his own, and for the new friends she will make on this journey.

The fate of worlds depends on it

What I love most about this series so far is the constant action going on. Right from page one you are thrown into this fantastic world of light and dark, creatures and pirates. Naif is one of the best main characters to have, as she is very sympathetic to all of them and their struggles to try to just exist in such a complicated world, with so much anarchy and politics happening.
I have been meaning to post this review since I read the book on it's release day and just like the first book (Burn Bright) I read through it so fast that I feel that I need to go back and re-read them immediately to catch everything I missed in my fierceness.
As Lenoir tells Naif "Times are Dangerous" it's so true. There is not one island that is not going through some kind of turmoil. What I would really enjoy to see is if this series takes off and we get to see Naif or other characters travel to some of the other places we have not seen yet. Visit the people and the way they live and interact would be awesome. This is the first series that I have seriously considered doing some fan fiction for, it speaks to me that much.
My absolutely favorite character in this book was Liam. I am so interested in how the night creatures interact with each other. How they view the world as a creature and of course what they have been through.
Besides the fast pace of the story and the new characters introduced, seeing the Island of Grave through both Naif's and Markes's eyes was like hearing about 2 different places. Naif's childhood was so locked-down that Markes seemed to have lived on a whole other island, so as we travel through Markes' hometown and the difference between the two was so imaginative all on it's own.
I really could not have any more hype for a series of books that this one. I am a complete fan-girl of Marianne De Pierres and completely encourage all to sign the petition to help bring these books worldwide!
Direct Link here http://www.strangemore.com/2011/07/interview-and-campaign-for-burn-bright.html

Or you can click on the blog sticker in the top right to get the link to the facebook page!
- October 11, 2011